This OCF-certified connected switches and plugs solution gives the ability to manage lights and other connected devices of the house. It works locally or remotely with switches, Smartphone or by voice via Wi-Fi

A solution adapted to everyday needs

This smart connected lighting solution OCF-certified works with switches (available in white, light almond and nickel) and power outlets. The Open Connectivity Foundation (OCF) delivers a standard communication platform, a bridging specification, an open source implementation and a certification program. It allows communication between devices regardless their ecosystem, brand or operating system. This solution goes beyond the standard with simple options in wiring devices and screwless wall plates that complement today's homes

Four devices are available to fill all the needs: 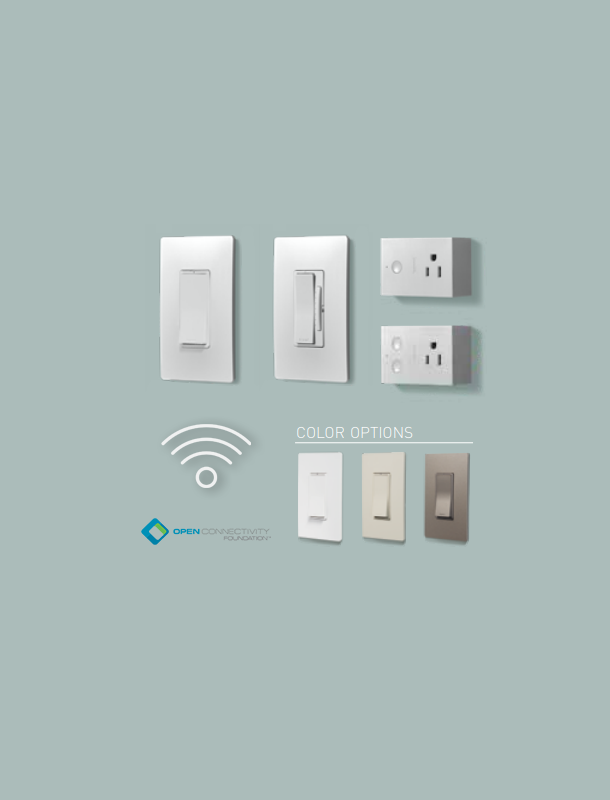 Control lighting from anywhere in the world and with any smart device thanks to “Smart Lights” application. Set scenes and schedules directly through the application linked to a Legrand Smart Switches and Outlets installation

Outside from home? Be sure the lights are correctly turned off. On holidays, simulate a presence by switching on and off the lights during the night, manually or automatically. The scenes “Movie Night” or “Party Time” allows to set a perfect mood for any event. Dim single or group of lights with a simple tap on a button

Automated schedules allow to synchronize lighting with sunrise and sunset. Scenes are customizable to fit the whole family lighting preferences, and lights can be activated with voice control thanks to Google Home and Amazon Alexa. Set up all your devices with the app and benefit from a full control over your lighting in the easiest way

In this video, Danny Winget partnered with Legrand to give is point of view about the Smart Switches from the Radiant collection he tested for one month. According to him, it’s one of the most cost-effective way to get full lighting control over an entire home

As an example, he mentions his kitchen where 11 bulb lamps are present. At approximatively $30 a bulb it would take more or less $300 to fully equip the room with smart bulbs, where two or three light switches can pretty much provide the same control: voice control with Google and Alexa, remote control, routines setup, and so on

The light switches are easy to install and available in a single pole and 3-way configurations in three different colors: white, light almond and nickel. To manage them, the free Legrand “Smart Lights” application is available on Android and iOS. To add a switch, a QR code is present on each back plate. Just scan it with the app and be automatically recognized on the Wi-Fi network

Danny appreciates the modern design and the fact it looks like a regular switch. Also, the plate can just be removed and putted back by pulling on it. A LED light is present at the top of the switch that indicate if the device is connected or if there is any type of connection problem. Also, when the light is remotely turned on or off via the app or by voice, the switch sound can be heard. For dimmer switches there is a LED displayed system that indicates the level of dimming

The Legrand “Smart Lights” app is built to manage all the installation (available on Android and iOS). On the main tab a column can be found to set favorite devices, on the second tab there is the list of all devices that can also be controlled directly from here. Devices can be put into groups: for example, create a group “Kitchen” where all the lights of this room are findable. On the last tab, scenes can be created: for instance, turn on all porch lights at a certain time. A calendar is accessible to choose at which days and hour the defined scene must be launched. The app is available everywhere, schedule routines can be set to be launched when away from home. Link the installation to Google Home or Amazon Alexa to get voice control over the home

For those who want a really simple installation to control their lighting, the Legrand Smart plug-in switches or dimmers are the solution. The switch version has an on/off button. It connects the same way as the light switches with a QR code to scan through the application, allowing to put it into automations and routines. The dimmer version has two buttons instead of one to give dimming capabilities for a lamp or a light connected to it. As for the previous device, lights can be turned on or off or dimmed directly through the application